skip to main | skip to sidebar

NYC: from hellish to beautiful and special 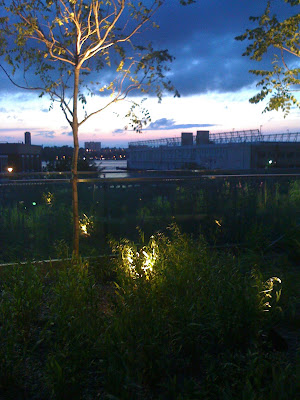 Picture this-August in NYC-left to live in SF yrs ago so to me, it's deathly muggy. Performing my play in NYC moving back & forth within the same 4 blox of the theatre district so many goddman times all I see is traffic & I don't even feel like I'm anywhere let alone in NYC. Finally Sun matinee is done and I just wanna die & catch my flight home Mon am & SOMEHOW I get talked into stumbling over to the HighLine and catch the Sunday sunset and a salsa concert at the Chelsea Piers. It finally hits me, I'm in NYC. And it's really really special and beautiful.

We make it to the end & I want good, reasonable, uncrowded and UNpretentious. Yeah in the West Village. My food czar friend suggests Moustache. A perfect ending to a perfect evening. It was circulating enough inside that we weren't hot, it wasn't hipster central and I wasn't breathing in some bridge & tunnel douchebag's Axe body spray fumes. Everything was terrific, from the lamb pitza - even the baba was really smoky and creamy. That was the moment, the only one in awhile, where I missed living in NYC.

Then the next morning was a zillion degrees and I was thrilled to be going home again!
Posted by enzosf at 1:42 AM No comments:

Skinny Rich & Famous (So How was New York?) 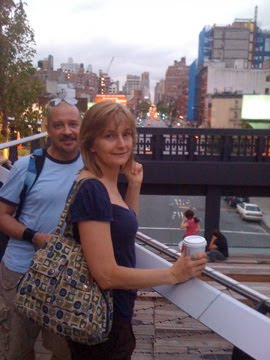 Landed back in SF after taking Love Humiliation & Karaoke to NYC and have spent the last few days just breast stroking back to a normal life. But I've been asked a zillion times "How was NYC" and there isn't really a sound byte answer.

The short is - it was an amazing experience. I really struggled not to go with a set expectation of how it would go. It was unpredictable. As previously mentioned, we had sound issues right off the bat the day we arrived for our tech (by sound issues I mean the issue of having no sound - in a show with more than a dozen sound cues, most of which are SONGS - none of the CDs or backup CDs worked and we wound up playing the cues through our iPhones!!) There would later be a lighting issue (the light burnt out 10 mins b4 curtain and we needed to rearrange several things stage right so when the lights for each episode came up I wasn't off in the dark somewhere).

I held my own in NYC and I'm damn proud of that - I wasn't sure whether I would - I only know I love doing what I do and that I'm really dedicated to getting this kind of story out there. But as far as "setting NYC on fire" or getting "contract offers" - (please you guys asked! somebody's been watching a little too much Entourage lately?) Those Lana Turner moments can happen in places like NYC and LA, which is what i think brings out the worst in performers via anxieties. I'm so grateful this is happening later in life, when I'm grounded enough to know all that matters at the end of the day is how I felt about how I did. And I feel very good. I had a great group of people, support, a great team, who often gave in excess of what I was able to give back.

But there were reviewers from pretty big places, and a casting director for films, but that's more par for the course there, just as here in SF a good portion of your audience has been in a 30-day recovery program, been briefly buddhist, and/or wandered into the sex industry at some point. Walking around NYC was like remembering how I was when i lived there. (Desperate to somehow be acknowledged as the latest thing, the best, the runaway success, but still terribly modest and cool about it, or so I thought.)

If I coulda looked in a crystal ball back in 1989 and seen that 20 years later, I would NOT ONLY NOT be skinny, rich or famous (and there was no particular order cuz it had better be all three or nothin), I'd've probably said "well then just take me out now" and a Yellow Cab would've been happy to oblige.

Of course, I didn't realize I assumed those elusive things would naturally make me happy. What I never imagined was how aimless and meandering my life would seem at certain points, how desperately in love I would be someday, how much that would heal me, grow with time and how much exponentially happier I'd be.

But as for washboard abs, well not so much (in fact no abs at all to speak of as far as I can tell), no one jostling to snap my photo when I leave home (good thing given the lack of abs) & no West Village townhouse - not even a Tenderloin townhouse. But life is very very good. Sometimes I feel more love and support than I can wrap my mind around. And I feel really fortunate to have created this vessel in which to pour more of myself than anything else I've ever known. This is the story I'd die to tell. A funny story about wicked serious sh*t. How if you don't lose faith and hope, even when life supplies you an endless buffet of sh*t sandwiches - your entire world can still change suddenly and dramatically for the better.

I wish this for everyone, which is why I risk putting ALL my sh*t out there. The fear, the loneliness, the neuroses - the laughs. So ppl can say "hey if this steaming hot mess can turn it around why the hell can't I?" But the secret of the path is that there is no path. But if you can dream it, I promise it's there waiting to be manifested. And in it's own way, it's probably bigger and better than anything you could've imagined.
Posted by enzosf at 10:08 PM No comments: